Youth Money Talk Hackathon & the case for Respect in Jamaica 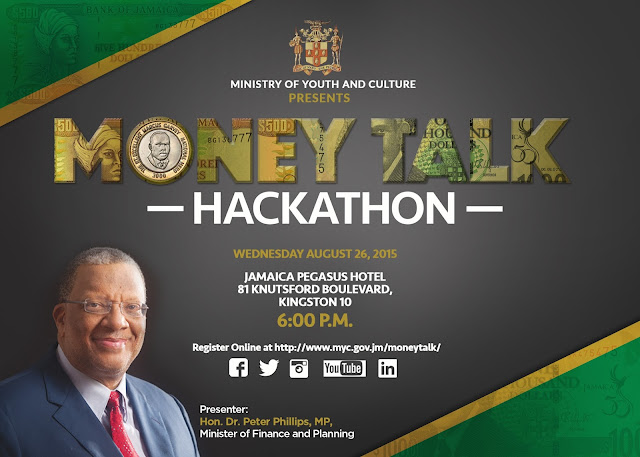 Just yesterday, August 26, 2015, I was a part of an audience of some 500 plus youth leaders at a Forum hosted by the Ministry of Youth and Culture with the main presenter being Minister of Finance, the Hon. Peter Phillips. The event promised to provide a platform for the involvement of our youth at the decision making table as a critical part of Jamaica’s success and economic growth. I was intrigued as I’ve long held the view that engaging with and encouraging participatory strategies for our youth can yield meaningful results.  Besides, I have been keen on ways to grow my recently launched FREE service provider listing site www.extrahandsja.com  and felt the forum may provide me with an opportunity to network

A few things out of the way, the event was branded as a #MoneyTalkHackathon and a quarter of the way in, I wondered about the term Hackathon and if the word forum may not have been more appropriate. As always, the trusty twitter network picked up on that too with several persons asking why the event was labelled a hackathon.  Eventually technology startup/tech events entrepreneur Ingrid Riley provided some well needed clarity.

A hackathon is an event in which computer programmers, graphic designers, UI designers etc collaborate intensively on a software project.

Moving ahead, As a young entrepreneur (Check out my latest project- a FREE service provider listing site www.extrahandsja.com) I also found the Money Talk aspect of the forum not as dense as I had expected, having secured my space to learn more about the economic empowerment activities and engagements for our youth. I was more keen on what efforts would be put in place to better assist young people to not only understand money and its management but to also be educated to the point of having a better appreciation about how their money management actions affect Jamaica at the microeconomic level. This especially as the Ministry’s Invitation letter promised “We believe that there needs to be a clear understanding of the current economic climate of the country and path we are on to compete globally…Together, we will explore how the current Economic Reform Programme (ERP) impacts Jamaica’s young people presently and in the future. This engagement will result in a greater understanding of your future economic prospects in Jamaica.”

Lovely objective, but not sure if this was achieved…

I had also anticipated that this “Money Talk” hackathon forum would have provided a launching pad for interventions that will make “money talk”a bit more relatable for our young people- break down the jargons, key in young people on the basics of investing, generating income, avenues for helping with starting and sustaining businesses-you know MONEY TALK kind of stuff and this I articulated via several tweets as I missed the opportunity to raise these points directly.

Commendations to @myscjamaica & @MOFPJA on a good start with #MoneyTalkHackathon Forums for dialogue are always welcomed!
— Jamaican Mommies (@JamaicanMommies) August 27, 2015

@LisaHannamp @PDPhillipsJa line is closed but please address what will be done to educate youth about money mgmt &how it affects the economy
— Jamaican Mommies (@JamaicanMommies) August 27, 2015

In the decade leading up to 1970 Jamaica had the fastest growing economy in the world. #Whatwentwrong? #MoneyTalkHackathon
— Krystal Tomlinson (@kryticalmind) August 26, 2015

“One of the main challenges I of today’s entrepreneur is that they lack the know how to run a modern business.” #MoneyTalkHackathon
— Renée Smith (@NoOrdinaryRenee) August 27, 2015

Is the govt considering environmental economics as we plummet head on towards capitalist defined standards of devmnt? #MoneyTalkHackathon
— Krystal Tomlinson (@kryticalmind) August 27, 2015

At best, the #MoneyTalkHackathon therefore provided a good start for what should become a series of sessions where young people can have open dialogue with their leaders. BUT that brings me to the next point.

The Case for Respect above All

In having dialogue with our leaders (whether elected by you or not, wheter you agree with their points or not), the case has to be made for respect in Jamaica and how our young people interpret and apply same. And to ensure my views are in no way overshadowed, I make it known that I have no underlying political affiliation which is being fed into my pronouncements.

As a mother and someone who falls within the United Nations secondary definition of youth, I cringed last night at the blatant disregard a few of Jamaica’s supposedly ‘bright young minds’ employed when asking questions of the ministers. Then was just about open mouthed after the rousing applause and overwhelming support that other young persons in the room gave for what I can only see as a “showpiece of youthful disrespect”.

First up was a young lady, who while lamenting issues of racism (a la classism) in Jamaica inquired of Minister Lisa Hanna whether she had not seen Dionne Jackson Miller’s feature on racism in Jamaica  and requests by organizations for lighter skinned individuals as employees (Someone please send me the video link).  As Minister Hanna declared that she had not, the youth leader berated “Are you that out of touch Minister?”

Proof I didn’t make this up!

The tone continued with a young law graduand  asking Dr. Peter Phillips for additional information on data around BPO operations.  While the minister sought to provide some clarity, the  youth leader declared (sic) “You can save your breath minister”

When Jamaican Mommies then tweeted its outcry, it was hopeful that others within the audience did not miss the terse comments and similarly denounced any thought that young people cannot have meaningful dialogue and raise strong points without being disrespectful.

One cannot ignore how supposedly educated young Jamaicans think it is ok to be downright rude to the ministers here at #MoneyTalkHackathon
— Jamaican Mommies (@JamaicanMommies) August 27, 2015

If such outright disrespect is seen as norm, Jamaica’s youth are at a sad place! #RespectYourElders still applies! #MoneyTalkHackathon
— Jamaican Mommies (@JamaicanMommies) August 27, 2015

Earlier I tweeted about a young lady who was #brightnotrude. She maybe 1 in a mil. Too many rude youngsters at #MoneyTalkHackathon @MOYCJA
— Shelly-Ann Harris (@harrisshellyann) August 27, 2015

It’s disheartening to see the level of disrespect in the audience toward the ministers hosting the #MoneyTalkHackathon
— Dimitri Lyon (@DimitriLyon) August 27, 2015

I know my views and those of the others noted may be the unpopular truth but it remains that even in a state of ‘fed-up-ed-ness’ we can make salient points and raise critical issues without being disrespectful.  For a minute in my thinking and shock I felt like a misnomer.  There were just too many persons around me saying things along the likes of  “yes a dat dem fi get” “same way so” et al.  This made me uncomfortable.  It made me uncomfortable because I am  old enough to remember a time where irrespective of disagreements the #RespectYourElders adage still stood.  I remember a time where in professional circles you acted professionally, I remember that in a world where reputation precedes persona it is often better to err on the side of caution than disrespect.

Now don’t get me wrong! By all means I encourage and applaud young persons who can vocalize the issues that affect them (and several other persons to their credit did just that).  I commend those who can ask tough, hard hitting questions of those elected to lead BUT I continue to affirm that this and then some can be done without any rude or disrespectful undertones.

@JamaicanMommies There is no “nice” or “diplomatic” or “polite” way to deal with these people who have FAILED us, time & time again!
— Ramon A. Walker (@DREWDIAMOND32) August 27, 2015

@JamaicanMommies IF they actually did their respective duties and SERVED the nation, this would not have occurred…. #FoodForThought
— Ramon A. Walker (@DREWDIAMOND32) August 27, 2015

Yet even within this reply, there are  several lessons  for both Jamaica’s youth and its elected officials.  I daresay, if the undertones and support for those bold enough to show scant disregard is anything to go by, the Ministry of Youth has just received some critical insights. It remains evident that Jamaica’s young people are upset, annoyed and in more local parlance ‘fedup’.  They clearly want to see a change and spring to life to be able to ask their leaders “So what about us?”.  This if anything is a great place for our Ministers to start.  Indeed, what about us? What about our dreams of being entrepreneurs? What about our dreams of home ownership? What about our dreams of making Jamaica our place of choice to Live, work, raise families and do business? After all 2030 is now not as far away as it once seemed.

Last night’s feedback by some of our youth is also a lesson for young people that we should always seek to practice today what we wish to become tomorrow.  Do you, our youth leaders wish to become a parliamentary representative who feels justified in shouting obscenities at colleagues and members of your nation? or a mother who feels it justified for your child to think they cannot make a meaningful point without attacking? Let us all make a conscious effort to be the change we want to see!!

As a takeaway, the Forum was indeed a great starting point, I commend the MAJORITY of young people who asked well reasoned questions in an eloquent yet strong manner and I look forward to other such sessions where Jamaica’s youth get a chance to share with their leaders.

Were you at the Money Talk Forum? What were you views on the session? on the comments of the youth leaders?

P.S. If you ever want a free space to advertise your services, List your services FREE via www.extrahandsja.com (A Jamaican Mommies Affiliate)

Drop us a line below.