Things we lost in the fire: Coping with home loss 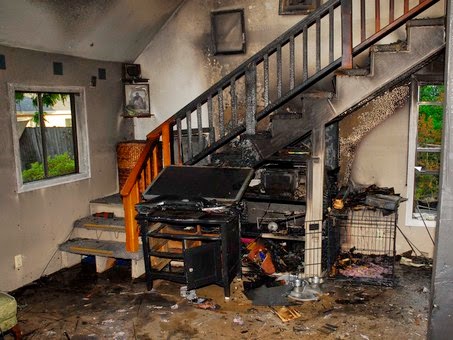 Things we lost to the flames
Things we’ll never see again
All that we’ve amassed
Sits before us, shattered into ash

Admittedly this may be my most painful blog post yet, only because it is the kind of thing that you hear of everyday but never foresee happening to your own family and even when there is a fleeting thought, you allow it to sprint away quickly because you don’t intend to deal with the possibilities or the reality…Now that it has happened, I deal with it the only way I can right now-I blog.

My family’s home was destroyed by a fire on Monday, June 9, 2014 at approximately 2:30 p.m and so the memory and scars are still very raw. I therefore write not to publicize but to find some outlet to keep the memory alive about all that was lost in the fire, while sharing some information at the end about coping with home loss due to fire.

As you can imagine, a family home is the house that has held memories for all of us as children and my parents. It is the place where for the past 24 years I have had endless fun with my siblings and neighbours, seen my younger sister enter the world, created a world of imaginary adventure; learnt to read, learnt to ride a bicycle, to play an instrument; It is also there that I learnt to laugh, to dream, to hope and today to cry.

Even as we grew as children and moved on to education and career pursuits and eventually our own families, it was also the place where more people kept coming in- grandchildren, husbands, wives, cousins, nieces, nephews, uncles, aunts and all the other children who my mother served as teacher and stand in mother.

Indeed there was no place like THAT home-the only place that provided solace on any given day, the place that provided comforts from everything- after all the most soothing sleep can often be found in a childhood room or in your parents’ bed. I would often joke with my mother about how every natural disaster found me at home–and it was true, I always made my way to THAT house that held a solace like no other-nothing could compare to my childhood home.

So when a neighbour messaged, it was only a blur when the words fire and house stood out, I willed myself not to believe and even a phone call to my mother seemed like a dream, but then…I got there and saw that not only was it true, but really everything was lost.

With no one hurt, the very next thoughts were about all important documents (you could always fetch a copy of every life related document from that house) and it spanned the range of children, grandchildren, nieces, nephews, uncles, aunts. As I waddled through layers of ashes and soot, there were no documents to be found…

And still, I hoped and prayed some more that some relics of the people who had lived in that house and the memories made there and the physical marks of accomplishments and everything worth noting that we had all ever achieved could be somehow found somewhere therein…but just about nothing…

Wading through countless layers of black- searching and searching and coming up empty handed is such a very deep-seated, heavy-hearted feeling I have found.

I watched as my frustrated brothers continued to pour water on patches where the fire seemed keen on reigniting and as my too teary eyed mother and shocked father looked on- helpless, hapless. But more heartbreaking was as my sister grabbed the only thing that remained of one of her many academic trophies-a toasted and fragmented bit of a statuette, hands raised but everything from waist down totally eroded, but yet she kept it- It was the only thing that she could find that would somehow serve as a reminder that she had in fact ever received it.

And so the endless search for nothing continued…. As I sifted through loads of burnt books and wet floors, a cover, a spine, a leaf from a favourite childhood book would just stare back- bringing back favourite memories of a time when I would read that very same book repeatedly and then recount the story endlessly to all who cared to listen.

A wall once lined with family photos now bare and only two of too many remained- One of me as a baby about 10 months old and the other of my brother at about six years old- the resemblance to his daughter is splitting I note as I hand him the glass frame to remove the excess water.

Even as I grab a handful of my trophies that have been saved, there is this very empty feeling all around as I realize that this is it. The only thing remaining is only the few damaged, blackened and wet things that we cling to and everything is nowhere to be found. It is almost as if they never existed. But I know better, they did-and even if they are just a memory, we have to hold that close enough and remember all that had been.

I’m glad my mother saved her table that was a gift from my father about 35 years ago. I’m also glad everyone is safe. I’m happy too we as children rushed from wherever we were to get to that one spot where the family bond all started. I was happy too that I did not have to go and stare at the bleak, gloomy and dreary view alone. Yet, even with so many things to be thankful for, it was obvious that this would be a very long process to near recovery and we would have to go through varied stages as a part of our way of coping with home loss by fire.

And even in her childlike splendour when my 5 year old after inspecting the damage announced “But grandma this means you can now have a new house” it struck a chord and forced us all to look for the silver lining where ever it was. My brother too by saying “Well fires purify” may have better put it into perspective as we silently agreed, that irrespective of all we lost, there was no dwelling on what was-there had to be a new start. 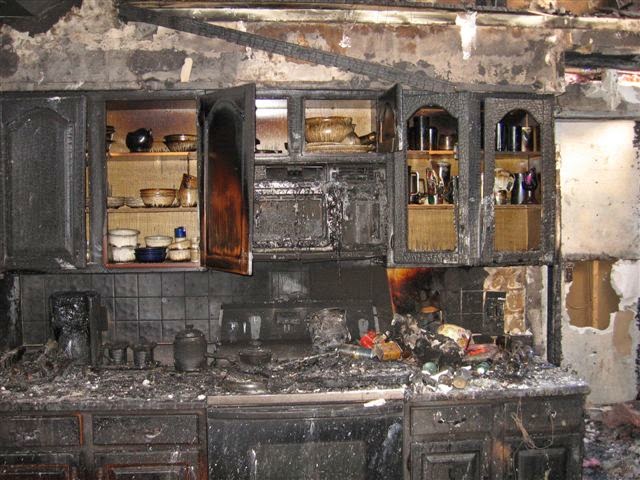 Police reports and firefighter theories aside, the thing that stands out the most is that things lost in a fire often can never be replaced, but sitting in the aftermath talking to my family, making endless phone calls reminded me that even with all the physical elements missing, the house was only a reflection of the people who lived therein. Sure, I would’ve given almost everything to have the physical evidence of what I looked like as a lanky teen or a chubby toddler but in the end my family, all sitting around on what used to one of our favourite ring game spot were alive and physically unarmed.

Emotionally scarred I’m sure and wondering about the rebuilding process, but still everyone is physically safe.

And after filling this page with too many words, I now remember my sister saying, “Please don’t put the photos online“- I promised and I wont- because even though she can deal with the thought of it all being gone, I suppose she does not want to come back to this blog post and see what we used to know as home- where too many life’s memories were stored just lying there, a mass of wet, black and burnt.

And even as we figure out how we truly feel about this life disruption, strangely this line from Bastille’s Things we lost in the fire is minimally comforting only because it reminds  me that having been brought in the world with nothing and reaching to other periods of nothingness, humans can once again arise, create and build.

We certainly were never prepared for this and doubt in the many weeks to come, we will be able to hold on a brave face much longer but still, no one can deny the preciousness of life even without the physical reminders of what made our family’s life unique. So even as I write, I know we are still miles away from coping with home loss. Moreso for my parents who still called that place home.

Have you ever experienced loss as a result of a fire?

Were kids involved? How did they deal with it?

How did you cope?

And because this article spoke to me on so many levels, I’m sharing it here, in the event anyone else needs reassurance that others have had losses due to fire and have been able to cope. Have a read >> Coping with Loss due to fire

0 thought on Things we lost in the fire: Coping with home loss