So we HAD a cat: Is a cat right for you? 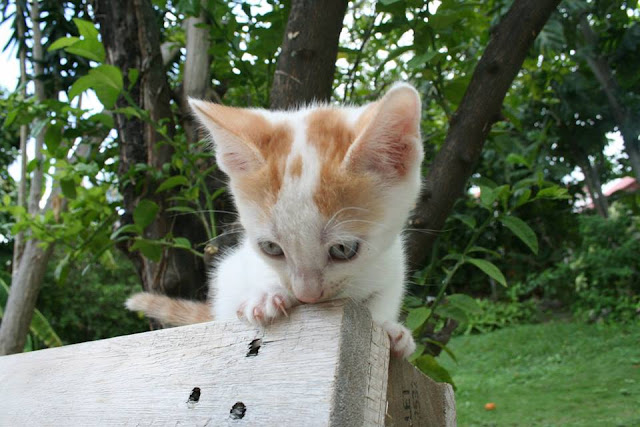 Yes you read that right.. we HAD a cat and no she didn’t die. We (two grown folks) clearly overwhelmed by one tiny kitten, agonized then recalculated, then reassessed then simply gave her away. Yes I know “but cats are so soft and cuddly and cushy and friendly”, but before you hurl all those anti-cat lover slurs my way hear me out while I even manage to throw a little salute the cat lover’s way in this two part piece which really should be called Coombsies and the Cat.

Meet Blossom, she really is the cutest little cat I have ever seen and so is her 3 other siblings.  You see, so cute they were that I thought it would be impossible to select from the the litter, but my 6 year old took one look at the photos and decided she wanted “That one mommy, the one with the little spot in her forehead and her name will be Blossom” and so it began. 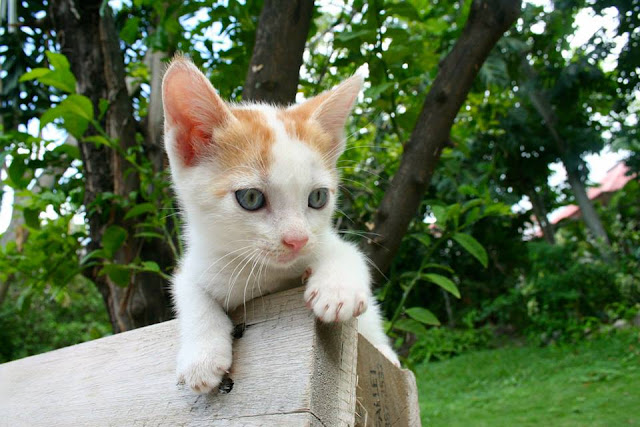 We went very ill prepared (Didn’t think we needed a box or anything) to collect our newest little addition to the Coomsbie clan and thanked our lucky stars when we discovered a shoe box long forgotten in the car trunk.  Blossom’s previous owners were also gracious enough to provide us with a few day’s worth of cat feed to tide us over (I did say we were ill prepared).

As my daughter’s 6 year old friend also wanted a cat, we collected another from the litter who the bright eyed child declared would be called Biscuit (Blossom and Biscuit eh). and so these two ballet class buddies and now B-name cat lovers were in cat BFF heaven.. or so they thought.

You see, as a child I have never loved cats. In fact I believe I’ve always hated cats. At merely 6 years old (ironic match-up with my daughter’s age) after visiting a neighbor’s house, a wet, jet-black cat decided my lap was a safe haven and decided to do a flying monkey jump and land square on my lap.  I panicked, I freaked out, I hollered and the cat in return while sliding down my legs dug its claws and left a nasty trail of blood and bruises along my legs. To this day I vividly remember the horror.

I wept through rounds of antiseptic wipes, alcohol and a nasty dark brown ‘dressing’ that my grandmother in particular always seemed to have on hand. Somewhere in my subconscious I then decided Cats (and especially jet black ones) and I were not meant to settle even on the same tile space.

But then along came Blossom…

Looking at her soft, too cute cuddlyness, I forced myself to grow beyond a decade long fear.  Heck, I willed myself to love and care for her and to give my daughter a chance to do the same and so our schedule went a little like this:

Day 1: I freaked when the cat rubbed against my leg

Day 2: I relaxed when the cat rubbed against my leg but did a majorrrr freak out when she climbed atop the couch and was rubbing against my neck while I was in R&R Mode

Day 3: I almost lost it when the cat swung on my curtains and left holes

Day 4: I am complaining to everyone who would listen about how the cat keeps going around, exploring all my vases chewing up all my peacock feathers!

Day 5: Phewwwww how in heavens can such a tiny cat let off such a stinky litter (I am NOT going to be the one cleaning that litter box)

2 weeks later, I run into my bedroom and close the door swiftly as this cat has taken a too keen liking to me and follows me everywhere- (Bathroom included)!!

But it isn’t about me alone either…

Over those two weeks, My daughter and Blossom has established the most oxy-moronic sort of relationship. She declares to all who will listen that she has the cutest cat and how much she loves her.  She manipulates her way into having us take Blossom over to Biscuit’s house for play dates and generally will pick up and even play a little ‘fetch the string or ball’ with the cat.

BUT… Once it gets to a point where Blossom (the every playful little kit) spots her first and ‘attacks’ all hell and powder house breaks loose.

So a typical scene at home will see Blossom hiding behind the couch, under the bed, under the table, waiting for your unsuspecting legs and then BAM leaps out in  full ‘crouching tiger, hidden dragon mode’. I’ll be doing some calming activity then hear a most chilling scream- the culprit? “Mommy it’s blossom she keeps jumping at me” and this goes on and on for days on end.

The last straw? A few days ago after noticing that my daughter was MIA from the living room, I went to investigate.  Sitting just outside her doors was the cat purring sorrowfully and there she was locked away in her room HIDING away from the cat.  Near tears, she explained that “Blossom won’t leave me alone” and then the ultimate straw came when presented with her dinner, I found my 6 year old sitting ON the table as in her words “I don’t want my feet to touch the ground as Blossom will scrape me”

Heavy hearted and for about the millionth time we have the “This is ridiculous. You cant keep hiding from the cat conversation” and so an option often discussed in hushed tones, the ‘scheming parents’ decide it will make us all breathe a little easier if we gave away our cat.

It felt sneaky and underhanded and even downright dirty.  Two grown folks tired of the screams and the tirades and the love-hate relationship contacting another family who had expressed an interest and making arrangements to deliver Blossom.

“It has to be done tonight” we whispered. This while miss ‘I love my cat but can’t play with her’ is hiding away in her bedroom and no longer lazing about in the family room.

We packed away Blossom’s litter box, water and food bowl, took along her litter and had daddy drive the route to deliver a cat we wanted to love but did not think it wise to keep.

At 9: 10 p.m after a hurried late night stop, Blossom was no longer a part of the Coombsie fold.

But did it stop there? Rest assured it did not, but the best part yet is WHEN little miss Coombsie discovered the disappearing act and better yet, how she responded then.  Moreso, little could have prepared us to have a good enough story to cover our scheming act….

Stay tuned for part two of “Coombsies and the Cat” (Edit: Part two now live>> So we Had a Cat Part 2)

In the interim, Are you a cat owner? Did your kids have any initial fears? How did they overcome them?  Cat loving tips duly welcomed!!

P.S.  Have you checked out our new Jamaica Mommies affiliate yet?! Pop on by www.extrahandsja.com. It’s all about connecting Service Providers and Customers!! So List your services for FREE or subscribe for listing updates!!