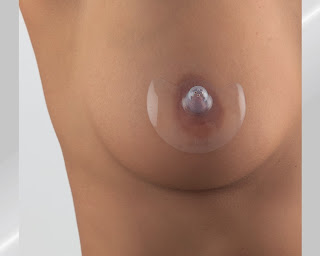 As a young mother wailed about breast sores, small nipples and her inability to breastfeed her newborn, it brought me back to a similar experience and a solution that few Jamaican Mommies seem to know about (yes we did a poll on our Facebook Page once and many didn’t seem to know)

Back in 2009 I was one such mama, who had many grand breastfeeding plans which just about shattered when multiple attempts led to a ‘too small/too flat nipple’ diagnosis. How was I going to reap the mommy and me bonding and countless other breast feeding benefits I wailed?! and within a day, the solution was forthcoming. My trusty paediatrician, mentioned an item that was previously unknown to me-The Nipple Shield and I have since been thankful for that little item that made my life so much easier as a new mom, if even temporarily.

So what is a Nipple Shield you ask? and what is it used for?

Thankfully, I did not have to look very far to find comprehensive information to share. A quick search led me to KellyMom.com and I thought how fancy, no need to re-do all this valuable information.

So some snippets to note from Kelly Mom’s post on Nipple Shields..

What is a nipple shield?

A nipple shield is a flexible silicone nipple that is worn over the mom’s nipple during a feeding. Nipple shields should in general be considered a short-term solution and should be used under the guidance of a lactation consultant. A shield should generally not be used during the first week after birth unless there is an obvious problem such as prematurity or difficulty latching which is attributable to some physical characteristic of the baby.

Jmommies Note: In my case, the shield was used 2 days in as I continued to grapple with latching issues. It was an easy process actually and hubby popped by a local pharmacy, collected same, we sanitized it by immersing in boiling water, popped it over my watermelons (more like oranges actually :-)) and voila!!
Common Reasons for Using a Nipple Shield
Common reasons for using a nipple shield include:

Advantages to using a nipple shield

Although nipple shields should be used only after other options have been tried, it is better to have a baby on the breast with a shield than not on the breast at all!

Jmommies Note: For me, it made all the difference to have been able to breastfeed my baby- a task previously thought impossible after we had latching issues. In the medium term, the nipple shield and her suckling motion also helped to pull my nipples down and I trust that when baby #2 rolls in, we won’t have such latching woes.
Disadvantages to using a nipple shield


Jmommies Note: Again for me, I faced no such woes. The shield allowed my newborn to suckle and we had a steady flow. I also found that it was pretty easy to position the shield to ensure the nipple could be pulled on. As far as weaning goes, a hungry newborn does not discriminate 🙂 Shield on or off, her mission was operation “get that milk” and that made all the difference when I eventually stopped using the shield.

What type of nipple shield is best?

If you’re using a shield, the thin clear silicon type of nipple shield is the best to use. There is also a variety of shield with a cutout that allows for more skin-to-skin contact than the typical shield. If you’re using a rubber shield, seriously consider getting a silicone one instead. Using a baby bottle nipple on the breast is never a good recommendation. 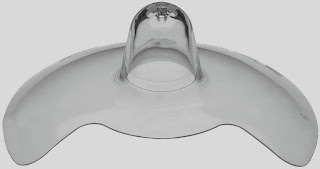 Thin, clear Silicone Nipple Shields are best for use

Jmommies Note: We added this sub heading as with my doctor’s input I ended up using the shield for well over 2 months (Many Lactation experts will express concerns about this long term use, have a read of one such evaulation via La Leche League)

As my desire to breastfeed continued and my nipples did not descend/protrude as planned, my Dr. suggested that I continue to use same and with that came the issues of hygiene and safety.

Thankfully, I received 2 shields in a clear case.  This helped greatly as I could plop both in some hot water and sterilize in much the same way that one would sterilize a pacifier.  My case also was cleansed regularly and so my shields were allowed to air dry then tucked away safely from the elements and accompanying me on all my mommy and me treks.

I did realize that over time, the constant interaction with hot water seemed to have had some effect on the silicone as the normally clear material later had a fogged appearance.  In my case, I simply went out and purchased another set and continued with my breastfeeding ritual.

With ongoing discussions about wheter Nipple Shields are Friends or Foe and the duration for which they should be used, it is strongly recommended that you receive feedback from a medical practitioner before proceeding to use.

For me, my nipple shield was a lifesaver. It came in handy after several attempts by my gynae, midwife, pediatrician, my mother and mother in law to help with my breastfeeding efforts.

I was deeply saddened at the thought of being unable to breastfeed and in that space and time, a slightly odd (yes I got stares from other moms when I used it in any slightly public space) little contraption helped me to experience a bit of the joys of breastfeeding. In the event, I am faced with breastfeeding challenges again, I will again make it a priority to exhaust all other options before proceeding to a nipple shield, but just in case I need to use same, I know it works.

So just in case you need to, there is even this neat little nipple shield with cover and trust me when I say the cover comes in handy. Also to ensure your sore nipples are taken care of meet these softshells for sore nipples.