Maia Chung Autism Foundation to seek support from the Jamaican Diaspora….Air Jamaica supports the cause 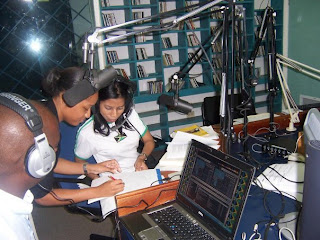 MESSAGE FROM THE MINISTER OF HEALTH AND ENVIRONMENTCaption: Maia Chung Host and Creator of Specials Jamaica’s only Autism Radio Show aired on Newstalk 93 FM every Tuesday between 10 to 12 midnight. Also pictured are Glendine Martin Production Co-ordinator and Alva Belnavis Production Coordinator and deejay

National Carrier Air Jamaica has gotten firmly behind the effort to improve the lives of the Jamaican Autist, as the airline will be the national carrier for a team representing The Maia Chung Autism and Disabilities Foundation that will between October 19th to 25th – 2009, be visiting Manhattan, New York – to address the Jamaican consulate in Manhattan… ostensibly to solicit help for the Jamaican Autist from the Diaspora community, specifically in the areas of raising awareness about autism, obtaining books about Autism for a reading corner to be established in collaboration with the Jamaica Library Service at the Tom Readcom, as well as to get funding to help meet education costs for autistic children in Jamaica.

The trip came about due to Mrs. Chung-Smith’s award winning philanthropic work as recognized by The First Global Bank which named her First Global’s Woman of Vision 2009 the second such honour to be bestowed by the bank, the first being awarded to Dr. Olive Lewin last year.

The award took Chung-Smith’s work to the international level where it was picked up on by author Rosetta Jamieson-Thomas author of the Autism Romance “A Margin of Hope” – a fictitious tale about a Jamaican couple’s struggles with coping with their Autistic son.

Jamieson-Thomas in an effort to promote her book with the secondary agenda of using the novel to parlay help for the Jamaican Autist…upon hearing of the award bestowed on Chung-Smith invited The Maia Chung Autism and Disabilities Foundation team to visit the United States this October , to appear at a book signing for “ A Margin of Hope “ at the Barnes and Noble book store in Springfield New Jersey – with the dual intent to promote the issues of need in the Jamaican Autism community and highlight the need for tolerance towards Autists through her novel. Mrs. Jamieson-Thomas has no personal experience with Autism but was moved to pen the book as a result of her work with challenged individuals in New Jersey where her family now resides.

The signing event, blossomed into a full on mission to raise support when publicist and daughter of the author Shauna Jamieson, began negotiations to have the visit become more impactful through a Jamaican consulate event by The Maia Chung Autism and Disabilities Foundation team …that should spark more awareness Stateside with possibly more help accruing for Jamaicans living with Autism.

“Right now the education matters affecting the Autists are the most crucial, despite Ministry allusion earlier this year , that some of the schools offering private care for Autism may have gotten grant aid status for this September …which would have been a great step towards defraying the astronomical costs associated with educating the Autistic…the promise was not kept by education Minister Andrew Holness” – Mrs. Chung-Smith said.

This has seen the expulsion of several seven and eight year old Autists from their schools as since the schools are not government funded, the schools themselves cannot pay teachers or pay rent to keep the institutions going.

“In this vein instead of lying down and letting go of all hope I am determined to see what we can do for ourselves I am a great believer in helping ourselves. The trip will mean me taking time off from my job but I am compelled to do what must be done, if we get even one child some help… my philosophy is the Foundation will be successful” – Chung said.

The actual link between the Jamiesons and Chung-Smith, occurred via the nation’s only Autism radio show SPECIALS aired on Newstalk 93 FM each Tuesday between 10 pm to 12 midnight. The mother and daughter duo after several emails did an interview on the show representing the first promotion of their work and publicisation of their interest in the disorder’s treatment in their homeland.

Copies of “ A Margin of Hope” are available for loan from The Maia Chung Autism and Disabilities Foundation by calling 876-578-3079 – leave your name and number.