Irish for a Day-St. Patrick’s Day Celebration in Jamaica 2016

“Irish Town in Jamaica is linked to the Irish from Ireland?” like duh right? Looking back, it now seems so obvious but for some reason I have never quite made the connection, that is until a member of Jamaica’s Irish expatriate community shared details about the St. Patrick’s Day celebration in Irish Town, Jamaica. As the event promised a grand parade, Irish dancing and Music, Gaelic Football and Hurling, Irish Food, Fun and the games for the kids and shuttle to the event’s location, I was intrigued. I figured why not, my daughter would enjoy the cultural adventure and I can enjoy the road trip and some new food :D.

To prepare myself for this new adventure, I actually went researching to find out more about the Irish-Jamaican link (They don’t call it Irish Town for nothing right?) and indeed I was mind blown at the rich cultural history and linkages between two countries that are  thousands of miles away. Off the top of my head, I did recall that Digicel, though an Irish Owned company is headquartered in Jamaica and that Guinness which is rooted in Ireland now owns Red Stripe/D&G. But several articles later, these interesting facts stood out:

*Jamaican National Hero Sir Alexander Bustamante is supposedly part Irish. The founder of the Jamaica Labour Party (JLP) and one of Jamaica’s political premiers, used to boast that he was 50% Irish, 50% Jamaican and 10% Arawak. (Nope that is not a typo).

* Norman Washington Manley, Jamaican National Hero and co founder of the People’s National Party (PNP) is also part Irish via his mother, Margaret Shearer who was the daughter of a mixed-race woman and her Irish husband, a pen-keeper.

*The tons of Irish Surnames: Though surnames such as the Burkes, The Collins, The Lynches, The Murphys , The Maddens, The Mullings, The Lanigans, The Walshes, The McCarthys, McCormacks, McDermotts, McDonnoughs, McGanns, McLaughlins, and McMorris’s. The O’Briens, O’Connors, O’Reilleys, O’Haras and O’Meallys are more commmon, the list is almost non exhaustive. If in doubt, check it out! Top 100 Irish Names

*The very first Irish Settlers to Jamaica were a mix of Slaves and Indentured labourers who were routed from Barbados in 1655 with Jamaica Gleaner records noting that the last batch of Irish labourers arrived in 1841.

* Sligoville, Jamaica’s first free village was named after Irish general Howe Peter Browne the Marquess of Sligo who was Governor of Jamaica at the time of emancipation from slavery in 1834.

* Several of Jamaica’s successful business families have Irish Roots including: The Browne’s of Busha Browne who are still breeding great horses at YS Farms; The McConnells of Bog Walk and United Estates who have reaped successes in sugar, rum and citrus; Leading horse trainer Phillip Feanny; Chris Blackwell, the founder of Island Records; Irish rock group U-2 who was born in Jamaica of an Irish father. Sir Phillip Sherlock, former Vice Chancellor of the University of the West Indies, and Jamaica’s greatest historian, is also descended from an Irish family who arrived in Jamaica in 1691.

Whew quite a history lesson there primarily via Rob Mullaly’s article on A short History of the Irish in Jamaica! Having discovered all of this ahead of my Irish Adventure, I was even more excited about the sojourn because we do have so much in common after all. 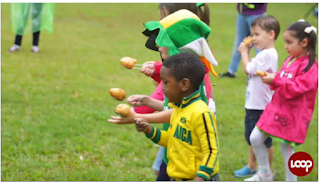 The journey to Irish Town was made all the more exciting as I sat with a family of four-Irish natives who moved to Jamaica in October 2015 with their 4 kids all born in a different country namely the UK, Fiji Islands and Antigua.  While my 7 year old played number games with the other kids on our shuttle, I almost choked on laughter when one of the other 7 year olds asked himsmum if we (my daughter and I were Irish), before she could reply my daughter blurted “No we’re Jamaicans, but mommy says there will be lots of games, an Irish parade and I am here to have fun” and with a shrug it was back to business as usual. 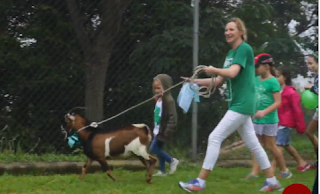 A few minutes in we arrived at the venue greeted by rain and the cool Irish town winds. I made a mental note about my non-smart decision to wear sandals and a summery dress.  But an even fewer minutes in , it was obvious that no one intended to let it rain on their parade-literally.  With festive Irish Music blasting through the speakers and kids scrambling along the mountainside in the light showers, it forced you to get in a naturally good mood. While I cautioned my daughter about playing in the rain, it became almost nonsensical as she tried to participate in traditional Irish games such as “horse-shoeing” (tossing horseshoes); Gaelic Football and Hurling (An Irish Game resembling hockey) and the Irish Parade. In the end she put her umbrella aside and dived in fully for several rounds of tug-o-war, potato and spoon race and running across the field with the bunch or rumbling, tumbling kids.

In between bits of varied Irish pastries and other treats including Irish Soda bread, scones, buns and Tayto chips, I found my body moving to the rounds of traditional Irish music and enjoying the displays of the traditional dance forms. The lively MC punctuated the varied activities ever so often with the perfect hints of humour and it was indeed a very light and lively gathering. 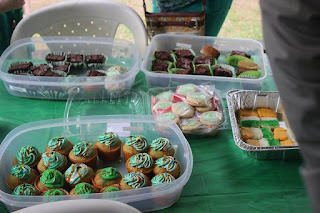 Between several rounds of beers, wines and other beverages, I smiled at the Irish’s appreciation for alcoholic beverages and thought- oh dear another Jamaican similarity eh (Jamaica has the reputation of having the most rum bars per square mile) and just when I thought we would be winding down a beautiful day out-the prizes came rolling in! From Smart phones to tablets, luxury restaurant dinners, sparkling wines to VIP experiences at Club Kingston and Montego Bay.

In the end, I learnt quite a bit about the Irish-Jamaican connection, experienced interesting bits of another culture, got introduced to delicious sweet treats, saw my daughter’s satisfied grin and heard her rambling on about the fun day she had.  Now her #1 Irish T shirt complete with a Four leaf clover and her Irish for a Day Pin are permanent fixtures in her memorabilia corner.

Any Irish natives on the rock? How was the local celebration different from those in other countries? Let us know!!!