Garvey the Musical and your Invitation to a Special Screening! 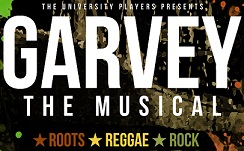 On Monday,  October 17, my 7 year old accompanied me to a fitting National Heroes Day showcase of Garvey, The Musical: Roots, Reggae, Rock.

Having always been a big proponent of Garvey’s teachings around self-sufficiency, economic development and empowerment for the black race,  I thought a musical was just the right thing to introduce my growing daughter to some of these key messages.

The Michael Holgate directed musical production therefore proved as timely as it was entertaining.

I went in with a blank slate as portrayals of historic personas often waiver between incorporating too much or too little.  It was therefore appealing that Holgate in his depiction of the life and times of Garvey utilized flashback,  leaps into the future and direct dialogue with three different Jamaicans in 2016 to highlight attitudes to Garvey’s memorable teachings.

Through a mix of song,  dance and varied dialogues,  Garvey the Musical drew an important parallel with Garvey’s most memorable teachings and the impact he had foreseen for present times against the many hurdles the black race is yet to overcome.

Most notably,  was the introspective scenes where three Jamaicans from different age, socio-economic and religious backgrounds were forced to come face to face with Garvey’s teachings and what is means to them,  to us,  to black people everywhere even in 2016.


The questions in particular posed by the youngster, Scrubs who questions Garvey’s relevance today and beckons to the adult population to “teach me more about Garvey in creative ways” was sobering.

Indeed,  the production left me feeling empowered and the songs added a well needed entertainment value to bring the right balance to historical revival with modern additions.

Andre Bernard as Garvey was convincing and Sk’ Burns as the ancestral Olo was gripping.  So too was Ackeem Mignott as the sometimes aloof but deeply contemplative Scrubs who brought the voice of Jamaica’s youth to life.

In the end I was left thinking,  we really need to  get Garvey’s teachings out to young people in creative ways.  I trust this was a part of Holgate’s  mission and if so he delivered accordingly.

To gauge the relatability aspect for kids, I enquired of my 7 year old about her most memorable moments and she declared

“Mommy I loved that Garvey was a strong man and loved when he was always encouraging black people, but I didn’t like when his father left him in the hole but understood that he wanted him to be strong. Did you hear when he said the black man must unite mommy? What does that mean?” and so she opened the door for further discussions #RealTears My 7 year old grasped the essence.

She also ranked Ancestral spirits Desmond Dennis and Rudolph Tomlinson (who also played Garvey’s father)  as her favourite characters and generally enjoyed the songs and dances that accompanied the production.

Without giving two much away,  Garvey,  the Musical: Roots, Reggae,  Rock was meaningful family entertainment.  It takes serious and relevant issues and presents them in a creative fashion, while forcing you to give much thought to how very relevant Garvey’s messages remain today.

Have you seen Garvey the Musical yet? How was it for you? Interested in being a part of a special family showcase?  Register your email address here to be among the first to get additional details.

To impart some of what empowered us, feast on some of our favourite Garvey quotes:

* If you have no confidence in self, you are twice defeated in the race of life.

* A people without the knowledge of their past history, origin and culture is like a tree without roots.

* Liberate the minds of men and ultimately you will liberate the bodies of men.

*I do not speak carelessly or recklessly but with a definite object of helping the people, especially those of my race, to know, to understand, and to realize themselves.

* Having had the wrong kind of education, the Negro has become his own greatest enemy.

* Lift up yourselves, men, take yourselves out of the mire and hitch your hopes to the very stars themselves. Let no man pull you down, let no man destroy your ambition, because man is but your companion, your equal; man is your brother; he is not your Lord, he is not your sovereign master.

*Always try to associate with people from whom you can learn something. All the knowledge that you want is in the world, and all you have to do is go and seek it.

* The Black skin is not a badge of shame, but rather a glorious symbol of national greatness.

* A race that is solely dependent upon another for economic existence sooner or later dies. As we have in the past been living upon the mercies shown by others, and by the chances obtainable, and have suffered there from, so we will in the future suffer if an effort is not made now to adjust our own affairs.

Have you seen Garvey the Musical yet? How was it for you? Interested in being a part of a special family showcase?  Register your email address here to be among the first to get additional details.